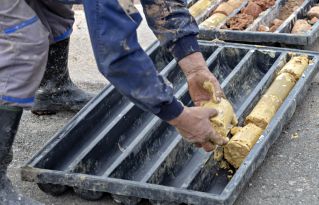 This project involved the decommissioning of a nickel hydroxide wastewater vault inside a facility in southeast Michigan that manufactures metal alloys such as nickel magnesium, nickel-metal hydride materials, and custom engineered nickel calcium alloys for hydrogen storage and nickel vanadium alloys for shape memory applications. The client retained ECS because we were able to assemble an experienced team including ECS staff, soil boring contractor, analytical laboratory and an environmental contractor.

The water and sludge within the vault were sampled and analyzed for disposal characterization, prior to being removed and transported for disposal. The environmental contractor then pressure washed the vault and drain lines and removed/disposed of the rinsate. The drain lines were plugged, the vault was filled with clean aggregate and capped with concrete. ECS directed the activities and documented the results in a Closeout Report. In addition, ECS conducted a subsurface investigation in the area of the vault and determined that no release to the environment had occurred. ECS also prepared a written professional opinion that the vault did not meet the definition of an Underground Storage Tank. 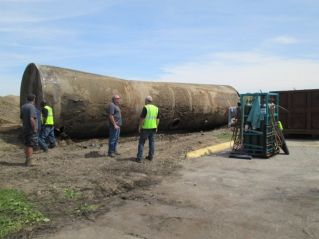 This project involved environmental activities associated with the removal and subsequent closure of three leaking Underground Storage Tanks (LUSTs) from a charter air service facility within the Willow Run airport, a Wayne Count Airport Authority complex under the federal jurisdiction of the Transportation Safety Authority (TSA). ECS meets the requirements of Qualified Underground Storage Consultant (QUSTC) and has three senior staff who meet the requirements of Certified UST Professional.

ECS provided oversight of the decommissioning and removal of the fuel distribution system and USTs which consisted of two 30,000 gallon and one 20,000 gallon tank  used to store jet fuel. Upon removal it was evident that the tanks had leaked, impacting both soil and groundwater. We performed numerous rounds of soil and groundwater investigation and determined that non-aqueous phase liquid (NAPL {essentially floating jet fuel}) was present.

Studies indicated that, over time, the groundwater contaminant plume and NAPL plume were stable or shrinking. ECS recorded a Restrictive Covenant that prohibited building structures in the source area due to potential volatilization to indoor air concerns. A Part 213 Closure Report has been submitted to the Michigan Department of Environment, Great Lakes and energy (EGLE). Communications with EGLE staff point to the likelihood of approval of the Closure Report.

ECS has provided services to numerous local, national, and international consulting firms. In some cases, the consultants retained ECS because they did not have a presence in the area of the project site, however much more often, ECS was retained due to our experience and capabilities. One example of this is a redevelopment project in Detroit, where a former commercial site was being redeveloped into multiple units of Permanent Supportive Housing (PSH) as well as an emergency shelter for homeless adult women and social services that the residents of the Supportive Housing units as well as the local neighborhood will also be able to utilize.  ECS was retained due to our ability to provide many of the required services in-house and assemble a diverse team that included Natural Resource and Cultural Resource experts.

ECS conducted a NEPA Environmental Assessment which identified numerous on-site historical sources of potential contamination including leaking underground storage tanks,  chemical manufacturing, and a metal stamping plant etc. In addition to directing the site characterization and remediation efforts, the ECS team completed a SHPO Section 106 Application, a Cultural Resources Study Plan, a Phase I Archaeological Survey as well as a Baseline Environmental Assessment, a Response Activity Plan, a No Further Action Plan, a Documentation of Due Care Compliance and LUST reports including a Final Assessment Report, a Corrective Action Plan and a Closure Report.  Finally, ECS completed a Vapor Intrusion (VI) Mitigation Pilot Study and designed the VI Mitigation system.

The results included HUD, SHPO, MSHDA and EGLE approvals and the project is currently under construction. 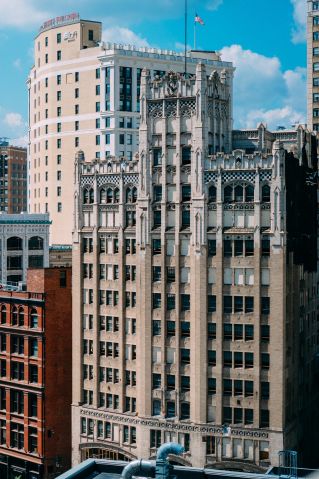 ECS has provided environmental due diligence (Phase I/II BEAs etc.,) building services (asbestos, lead based paint, mold, radon), USTs and vapor intrusion investigation/mitigation to many developers on high-profile properties.  We have found that ECS is typically retained because we provide a broad array of consistent, high-quality services that deliver great value. Most clients have not experienced (and therefore do not understand the value of) consultants that are “team members”. In this relationship, ECS is interested in the clients' business and thinks on their behalf to ensure that their interests are served. Our mission is to turn today’s problems, disruptions and costs associated with environmental issues, into a genuine organizational asset “with a measurable return” for our clients.

Some of the higher-profile properties in Southeast Michigan that ECS has provided services for include the Detroit Music Hall, Opus one, the Metropolitan Building, and numerous properties in the heart of the Eastern Market redevelopment district.